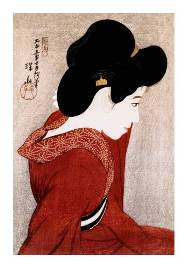 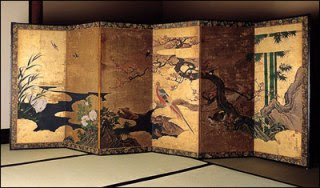 In September, Castle Rock AIKIDO student, Sean Hannon, was stuck in Chicago during a layover and had just barely enough time to pop into The Art Institute of Chicago to visit their featured exhibit on decorative, Japanese Screens called: Beyond Golden Clouds.

It was a powerful exhibit with perhaps nearly one hundred different, folding Japanese screens called "byōbu" from as far back as the 15th century. Although photography was not permitted, the exhibit still left visitors with a profound appreciation for this long time, traditional artwork.

Like many Japanese arts and crafts, folding screens originated in China; prototypes dating back to the Han dynasty have been found. The term "byōbu" means figuratively "protection from wind", which suggests that the original purpose of byōbu was blocking drafts. Byōbu were introduced in Japan in the eighth century, when Japanese craftsmen started making their own byōbu, highly influenced by Chinese patterns.

Also at the museum, unrelated to the Golden Clouds exhibit, was a more modest, but equally moving, Japanese art exhibit. In the Asian arts wing of the museum was a beautiful exhibit exclusively feating the works of Japanese woodblock print artist, Ito Shinsui (1898-1972). Shinsui was one of the great names of the shin hanga art movement, which revitalized the traditional wookblock style art after it began to decline with the advent of photography in the early 20th century. Shinsui is best known for his numerous, reflective portraits of Japanese women, but his seasonal landscape are equally captivating and were also featured in this exhibit.

The exhibit's summary sign stated that Frank Lloyd Wright was greatly inspired by the works of Shinsui. In fact, one of Shinsui's most famous pieces, Before the Mirror, (pictured above) is soon to be hung in our dojo lobby.

Learn more about Ito Shinsui HERE.
Posted by Sean Hannon - owner at 6:08 AM