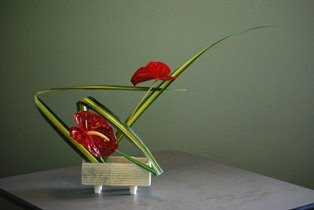 Cost $35, includes flowers and you may take the arrangement with you.
Pre-Register by Clicking Here. * Mother's Day Gift Idea - If this seems like fun, tell your family that this could be a great Mother's Day gift idea.
Castle Rock AIKIDO is honored and excited to host accomplished Ikebana instructors, Seiko Yoshikawa and Kyoko Kita for this hands-on beginner's Japanese flower arranging workshop. Mrs. Seiko Yoshikawa teaches in Colorado Springs and senior Ikebana instructor (called a "sensei" pronounced "sen-say"), Mrs. Kita, is well known throughout the Japan and United States Ikebana community.
This workshop comes at just the right time of year and is a great opportunity to learn a new, artful way of displaying your flowers all summer long.
Space is limited! Click Here to Pre-register today or call Castle Rock AIKIDO at 720-221-3665.
What is Ikebana?
Ikebana is the Japanese art of flower arranging. It is a three dimensional art form and the philosophy expressing the interrelationship between the self and the outer world.

There are many different styles of Japanese flower arranging. Sogetsu is a modern (since the 1920s) and innovative school of Ikebana that encourages imagination, individual creativity, and the idea that anyone can create ikebana anywhere, any time, with anything. Line, open space, focal point and asymmetry are key elements of Sogetsu design. After mastering many basic forms to learn technique and the design principles, Sogetsu Ikebana students progress to free style designs where the only limits are those of imagination.

Castle Rock AIKIDO, a Japanese martial art exclusively for adults, is committed to offering quality Japanese cultural events to the Denver metro area. In the past they've hosted a chef from Nagasaki, Japan who cooked a delicious tempura dinner at the school, Zen meditation seminars with an Renzai Zen Master, and a lecture on Japanese sake alcohol. To find out more about their award winning program, please visit http://www.craikido.com/

Castle Rock AIKIDO is a martial arts school unlike many others in that their program is reserved exclusively for adults. That's right! No Kids Allowed! 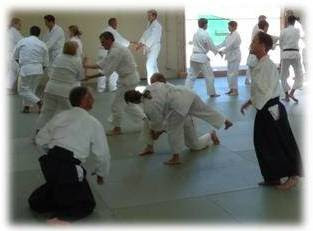 This martial arts school has identified a growing demographic of adults who are specifically looking for adult only martial arts programs. These people want to be able to completely and totally focus on themselves for just a few hours each week - a place where they can get away from the overwhelming responsibilities of work, home, and child raising for just a little while. Castle Rock AIKIDO provides just that.
At this school, adults have the opportunity to socialize exclusively with other adults, to de-stress, to physically reconnect with themselves, and get centered psychologically. In fact, it is not uncommon for parents and couples to train Aikido together where they can reconnect with each other, as adults, and step outside their non-stop roles of Mom and Dad. The philosophically non-violent martial art of Aikido also serves as a great new activity for recent empty-nesters or divorcees who may be struggling to some extent with their identity and newfound position in the world.
"We love kids," says Sean, the owner of this highly-specialized martial arts school, "but for our program, you must be over eighteen and we are quite strict about that policy. We have to be. For every child we might allow into the program, we would stand to lose several adults students who specifically train with us for our unique, adult-only atmosphere."
Since winning the 2007 "Best of Castle Rock" designation for martial arts by Castle Rock Magazine, Castle Rock AIKIDO has continued to grow, attracting students from as far north as Boulder and as far south as Fort Garland, Colorado, which is west of Pueblo. This came as quite a surprise to them. After investigating this interesting phenomenon, they quickly discovered why they had an affinity for attracting students willing to drive significant distances to come train in Castle Rock. "It isn't just because of the amazing quality of our Japan-trained instructors," boasts Sean. "We ask every single person who walks through our doors what made them select us when there are so many others closer to where they live? One particular answer kept coming up: they really liked the fact that we are for adults only."
It has become increasingly clear to Castle Rock AIKIDO that there exists a distinct impression that the martial arts industry has, in their words, been more or less "hijacked" by the day care industry. In many schools, it has become less about serious physical training and more about babysitting in flashy, colorful uniforms. In some respects, it has become a part-time, surrogate parenting program. Of course, these programs for children are fantastic and are very much needed today. However, this trend appears to have created a negative side effect: it has alienated those adults who take their continued personal growth in the martial arts more seriously and don't like seeing their passion for martial arts caricaturized and commercialized. Castle Rock AIKIDO is now serving the needs of this neglected, abandoned market.
"In my opinion," says an instructor at Castle Rock AIKIDO, "the martial arts industry has become so kid-focused that many adults are almost embarrassed to participate in martial arts programs beyond their youth. This is incredibly unfortunate considering the tremendous health, fitness, social, and, of course, self-defense benefits martial arts has to offer adults." Castle Rock AIKIDO is committed to changing this distorted perception.
Lots of martial arts programs claim to have adult classes. But according to Castle Rock AIKIDO, the actual definition of an "adult" is often very loose in some schools. For example, it's not uncommon for some schools to consider 14-year olds an "adult." But, the truth is that most 41-year olds don't like being in a martial arts class with 14-year olds. At Castle Rock AIKIDO, an adult class is an adult class. Period. Most of their students are between 25-55 years old and the oldest student they've had, so far, is now seventy. Aikido is one of the few martial arts that doesn't discriminate against its practitioners as they age.
"To our knowledge, we may be the only martial arts program exclusively for adults in Douglas County," says Hannon. "We are very proud of that distinction and that is what our students want - a kid-free zone."
You can visit their web site: http://www.craikido.com/ or call them at 720-221-3665 for more information and to receive a coupon for a FREE class.
Posted by Sean Hannon - owner at 10:07 AM No comments: