The Busiest, Most Energetic Grandpa in Castle Rock Happens to be an Instructor at Castle Rock AIKIDO 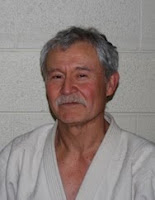 Sixty-six year old Tip Harris is one busy grandfather. He retired from a long career with Walgreens several years ago, but certainly has no intention of slowing down. Several times per week Tip gets up before dawn to go teach 5:45am martial arts in Colorado Springs. Then he spends his days working for a garden and landscape company. When he's done with that, he drives over to Castle Rock to, again, teach evening martial art classes at Castle Rock AIKIDO, a traditional Japanese martial arts program exclusively for adults. On weekends, Tip can often be found attending one of his wife's orchestra concerts, doing upkeep on his vacation property in the mountains, or chasing around his grandchildren. Where in the world does this man get all this energy and vigor? Apparently, there is a secret.
Tip attributes his abundant energy and continued flexibility and agility to his 25 years practicing a Japanese martial art called Aikido (pronounced 'eye'-'key'-'doh'). "It's simple, really. If you don't ever stop moving, your body doesn't get stiff," says Tip. Aikido is a fun, sophisticated martial art that teaches you not just how to defend yourself, but how to produce peace, relaxation, and balance inside yourself by learning to connect with your body. This balance produces energy, agility, and strength. It also helps keep the body free of pain. "It is all about finding your center and learning how to use it to your advantage," says Tip. "Aikido has nothing to do with strength you may or may not yet possess. It is all about body position, leverage, and focus."
In the art of Aikido adult students of any age learn how to do things that they didn't know they were still capable of. "We spend a lot of time teaching people how to fall and roll safely. Many adults haven't done things like somersaults in 20, 40, even 50 years and they are absolutely terrified of relatively benign things like falling down or slipping on ice," explains Tip. "We slowly and carefully teach people how to wake up their bodies and show them that they don't have to grow weak and stiff as they get older."
Visitors to Tip's classes in Castle Rock are often amazed to see that Tip doesn't just passively stand there on the sidelines and instruct. He fully participates in class and does all the techniques, falls, and throws with the students. During the warm up he is often performing splits and in class he often takes 6 foot long dive rolls and breakfalls that boggle the minds of students half his age. He is living proof that Aikido helps keep your body, mind, and spirit young and strong into your 40s, 50s, 60s, and beyond. "I hope I am a good example of that. People are often stunned to hear that I didn't even start practicing Aikido until I was forty."
Surprisingly, Tip is not all that unique. The Founder of Aikido, Morihei Ueshiba, vigorously trained Aikido into his late 70s. A quick search for "Aikido" on YouTube.com will bring up dozens and dozens of videos of men and women in their 60s, 70s, and even 80s practicing Aikido with such intensity and power, you'll start to doubt your eyes.
"Tip Sensei is a real inspiration to many of the students here in Castle Rock, not just physically, but, in a martial arts sense, spiritually, too," says Aikido student, Tim Keating, age 50. "Most people Tip's age tend to retire from life. Tip shows us that there is so much more to be had." Tim Keating lives in Castle Pines, but is the owner of a California mountaineering business, SWS Mountain Guides ( http://www.swsmtns.com%29,%20which/ takes people on mountaineering trips all over the world. "In my business, it is imperative that I stay healthy and fit so that I can keep climbing mountains with my clients. I know that practicing Aikido with Tip Sensei will help me maintain that fitness level. Plus, it's a lot of fun!"
If you're 30, 40, or 50 something and are starting to complain about how tired, old and stiff you are getting, you might want to come watch Tip Harris practice Aikido. It might make you reconsider a few things about getting older. And, who knows? Maybe you, too, could create a younger, stronger, more energetic self! Visit http://www.craikido.com/ or call (720) 221-3665 for more information about Tip's classes at Castle Rock AIKIDO.