Samurai Sword Training: The Change from a Killing Art to a Spiritual Discipline 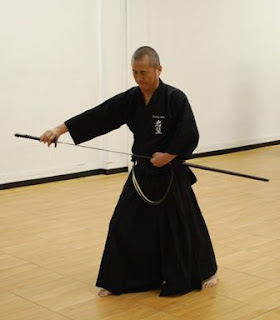 From Iai-jutsu to Iai-do:
The Evolution of a Killing Art to a Spiritual Discipline
by Iwakabe, Hideki Sensei, 6th Degree Black Belt

The designation of "sword-drawing technique" as a distinct budo form, iai-do, was made only in the twentieth century. But the essence of iai-do, a non-combative discipline engaged in for the individual's spiritual cultivation, is clearly a product of Edo period thought.
Iai-jutsu, the classical sword-drawing art practiced for combative purposes, was contained in the curricula of hundreds of martial traditions that existed prior to the Edo period. For the kenshi who specialized in iai-jutsu, the sword was to be drawn quickly and struck accurately onto the target. During the peaceful Edo period some of the ryu that featured iai-jutsu died out, but the majority continued to function, while new ones emerged. The socially privileged Edo-period warriors continued to wear the daisho combination of long and short sword, and as long as the sword served as the symbol of the warrior class, there were those warriors who saw a use beyond the practical for sword-drawing techniques. These visionaries were responsible for employing the sword as a spiritual instrument, using it in a manner distinctly different from that of iai-jutsu; these men were the pioneers of the disciplines that are called iai-do.
Orthodox tradition claims the original essence of iai-do to be the product of the genius of Hojo Jinsuke Shigenoby, more popularly known as Hayashizaki (or Rinzaki) Jinsuke. There are all sorts of ideas as to the details of his life, but most of them are pure fiction.
Only a few facts are definitely known about Hayashizaki Jinsuke. He was born in Sagami (present Kanagawa Prefecture) in the mid-sixteenth century. That he had combat experience is unproven, but the Bujutsu Taihaku Seiden, an Edo-period manual, states that he spent seven years, form 1595 to 1601, studying swordsmanship. He then devised a system of sword-drawing techniques that he called batto-jutsu, a term equivalent to "iai-jutsu," and gave his style the name Junpake Den. To test himelf and to establish his teachings, Jinsuke toured various provinces in mush-shugyo fashion. He gathered many disciples. When he was seventy-three years of age (around 1616) he toured for the second time then disappeared; no one ever heard of him again. Hayashizaki Jinsuke's influence on swordsmen was great; during the Edo period more than two hundred ryu primarily concerned with sword-drawing techniques emerged, stimulated by his teachings.
The successors to Hayashizaki Jinsuke embodied their teachings under the name Shin Muso Hayashizaki Ryu, generally subsumed today in the Muso Shinden Ryu. Jinsuke's successors can be traced with certainty through the eleventh headmaster. Thereafter a split in the ryu developed, and one segment terminated with the teachings of Nakayama (Hakudo) Hiromichi, the sixteenth headmaster; the other segment claims continuity in its teachings down to the present, and nineteenth, headmaster, Kono Momonori. Modern exponents of the Muso Shinden Ryu generally regard the line that ended with Nakayama Hiromichi as the true centerline of the ryu.
All evidence indicates that Hayashizaki Jinsuke may have taught only a kind of "quick-draw" technique. His choice of the word "batto" (literally, "striking sword") to describe the sword in action affords a clue, for the term "batto" includes the implied meaning "to strike instantly" with the sword. Thus, Jinsuke's method differed little from the older systems of iai-jutsu, many of which also used the term "batto-jutsu." It also appears that Jinsuke may have taught that his system of drawing the sword was to be used only in a limited way during combat, that is, only as a defensive art useful in meeting the attack of an assailant. If this is so, his method differed from the older iai-jutsu systems, which were both offensive and defensive systems as the situation demanded.
Part Two: coming soon
Published with permission of Iwakabe, Hideki Sensei
Would you like to come watch a Iaido class to see if it is right for you? Visitors are welcome. Click here for more info about Iaido, visit http://www.craikido.com/, or call 720-221-3665. Classes held at Castle Rock AIKIDO.
Posted by Sean Hannon - owner at 5:08 AM