Which is Stronger? A Speeding Bullet or a Samurai Sword? 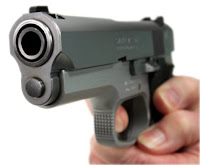 I was flipping about the channels last weekend when I came across a very funny, and rather chovanistic, television show on Spike Network called Manswers! It is a show that pseudo-scientifically tries to answer questions that only guys would ever think of. An example of such questions include, "How many days can an average man survive on beer alone?" This ought to give you an idea of the intellectual capacity of the show's producers.

Nonetheless, they aired a segment called, "Which is stronger: a samurai sword or a speeding bullet?" The answer very much surprised me. It turns out the answer is: A Samurai Sword.

They carefully lined up a Colt .45 handgun to fire a bullet at 1,022 mph to strike the sharp edge of a traditional, Japanese samurai sword handcrafted by heating and folding its steel 33,000 times.

The sword was mounted in an upright vice so that the bullet would strike the blade of the sword perfectly. The result? When viewed in slow motion, it can be easily seen that the edge of the sword literally slices the lead-encased the bullet in half! Think about that next time your swinging around a katana blade!
Click here to watch the Spike video on the samurai sword vs. the bullet.
Posted by Sean Hannon - owner at 4:15 AM

of course is the Samurai sword...:)
Nice topic.
Congratulations for the Blog.