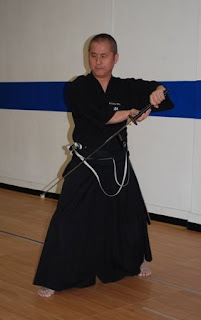 After repeated requests, we are finally ready to start offering instruction in the Japanese art of sword drawing called Iaido. Iaido (pronounced 'ee'-'yai'-'doh') is the traditional Japanese art of drawing, cutting, and retracting the Japanese samurai sword or 'katana.' The word Iaido literally translates as "the way of mental presence and immediate reaction." Iaido is a distinct, non-combative form of martial arts intended to cultivate a practitioner's spirit. Like Aikido, Iaido is purely a defensive martial practice.

Beginning in April, Iaido classes will be held Thursday evenings from 7pm - 9pm. Castle Rock AIKIDO students will receive a substantial tuition discount for training Iaido. You do not have to be an Aikido student to participate in these classes. Iaido is a great martial art for adults of any age. For more information, please call us immediately at (720) 221-3665. Class size is very limited.