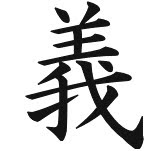 This month we continue to review and evaluate Bushido's major principles, concepts, and values as articulated in the classic 1899 Japanese text, Bushido: The Soul of Japan, by Inazo Nitobe, and evaluate their applicability in today's modern world. Bushido: The Soul of Japan is one of the first major works on samurai ethics and Japanese culture. It is considered by some to be the first collective statement of what is commonly referred to as the Seven Virtues of Bushido.


Nitobe offers for consideration seven virtues of Bushido that attempt to illustrate the philosophical values of the samurai. However, it should be recognized that there are not, in truth, seven virtues of Bushido. This is only Nitobe's subjective articulation of samurai culture and it is little more than an artificial construct. Other academics like Nitobe or practitioners of Bushido could easily and perhaps in an equally comprehensively fashion offer four, ten, or even one-hundred virtues of Bushido. Furthermore, the seven virtues presented here are concentric. That is, each value overlaps with and is influenced by another. No single virtue of Bushido exists or can exist by itself. Remember, all systems, including Bushido, Aikido, or any other, are ultimately artificial. The holistic nature of any system of values is unlikely to be comprehensively articulated in written language. Some virtues transcend written word. Nonetheless, we will attempt to explore each thoroughly.