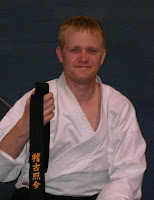 Worldwide stastics for Aikido reveal that less than 5% of all Aikido students ever reach the rank of black belt. To show how proud we are of Daniel-san for his recent promotion to black belt, Castle Rock AIKIDO decided to purchase Daniel's personally embroiderd hakama (those large, pleated skirt-like pants) and black belt for him.

Embroidered in gold, one end of Daniel's belt reads "Keiko Shochin," which roughly translates as "training in the old ways brightens the present." The other end reads "Da-ni-eru," which is the Japanese phonetic for "Daniel" in the katakana alphabet. This phrase was personally selected for Daniel by Sensei and was meant to inspire Daniel's continued growth in Aikido and in life.
The three characters that comprise Daniel's phonetic name have special meaning in and of themselves. 'Da' means "big, huge, or great." 'Ni' represents "benevolence." 'Eru' implies "to receive" or "to gain." Therefore, Daniel's name in Japanese means "to receive or gain great benevolence!"

Do you want to earn a black belt in Aikido? Our traditional, "un-Americanized" style of Aikido gives students a chance to learn Aikido in a Japanese cultural environment. Aikido is perfect for adults who are looking for a fun way to get exercise and develop self-mastery. Visit www.craikido.com to get a coupon for a free class.